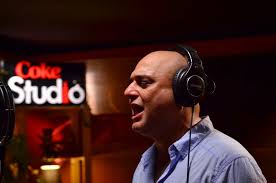 Pakistani Music industry cannot be written without a whole part devoted to Ali Azmat. Ali Azmat was born in Pakistan on 20th April 1970. Ali is Singer, Songwriter, and actor. One of the best songs “Dosti” is written by Ali Azmat and it is his first song he writes. Ali started his singing career with pop rock band “Jupiter” in 90s Ali was the part of the most famous band of South Asia “Junoon” as lead vocalist. Junoon gave Ali the enormous achievement of his singing career. Music produced by “Junoon” was merger of rock and Sufi music which give a new chapter to music industry. Junnon produced around 20 albums and more than twenty million copies were sold worldwide. Junoon won the “Best International Group” award at channel [V] in 1999.

Ali Azmat contributes his music talent in Indian and Pakistani film industry he also appears in Coke Studio. Ali Azmat is a worldwide image a global identity and world ambassador for peace. (My guitar my bike and my fans without them I am not me) this single line defines a lot about Ali Azmat.